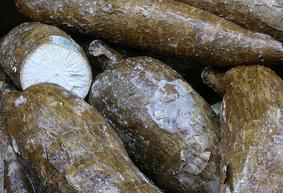 The most famous dish of Espirito Santo’s State is the “moqueca Capixaba”. Symbol of its regional cuisine and appreciated everywhere, the moqueca is known for its unique way of cooking and serving.  The name “moqueca” designates exactly this way of preparation wich is using a clay pot to cook the seafood and vegetables with no addition of water. The ingredients include the fish(or other seafood), onions, tomatoes, garlic, cilantro, “urucum” and “malagueta”  pepper.
The moqueca is served on the same clay pot it was cooked, with the sides of white rice and “pirao” a thick broth made from the moqueca and yucca flour.The unique version of the dish that is served in our family restaurant in Oxnard, is a combination from the ancestries of both "sarcinelli" and "Reis" families. 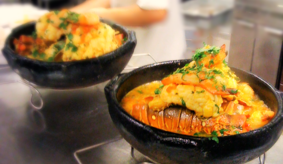 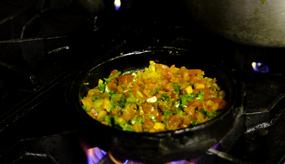 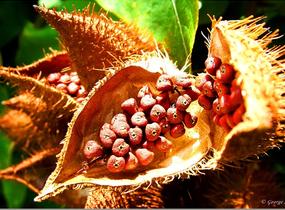 The traditional cuisine of Espirito Santo's State is closely related to its place, history, climate and economy.
Espirito Santo is a small Brazilian state, located in the east portion of the southeast region of the contry. Its coast has 250 miles of beautiful Atlantic Ocean's beaches and rich forests. The weather is wet and tropical. The people are friendly and kind, they are known as "CAPIXABAS".
Vitoria, the State’s capital, is an island surrounded by beaches and mangrove swamps. 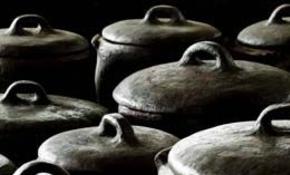 “Urucum” is the name of a Brazilian Prickly red fruit. Inside the fruit the dark red seeds are used to make the “coloral”, a traditional powder used as a coloring and tasting seasoning.
The “urucum” is rich in proteins, iron, calcium and vitamins. It’s recommended as treatment for high cholesterol, hypertension, digestive and skin problems. The Cosmetic Industry also uses the “urucum” to produce beauty and tanning products.
The “urucum” is responsible for the exotic color and rich taste of the “moqueca”.

Yucca is an edible root of extraordinary importance in all the Brazilian Cuisine, traditionally used by the Indians. It can be consumed cooked or fried, and is used to make the yucca flour. The yucca flour is part of the Brazilians day by day meal and it’s rich in carbohydrates and fibers.

The clay pot produced in Espirito Santo is one of the most expressive part of the State’s popular culture. Originally manufactured by the Indian tribes living in the coast, they are still made by the “paneleiras” (the pot making women who live  close to the mangrove swamps).The pot is made from black clay and mangrove tree saps, that are washed and  modeled.  After dried at open air and put on a bonfire, sap is applied a few times to blacken the clay and to make it water resistant.

The sap is found in the “Red Mangrove Tree”, a plant of the region. 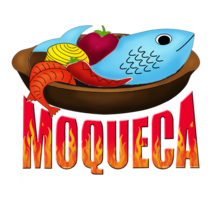